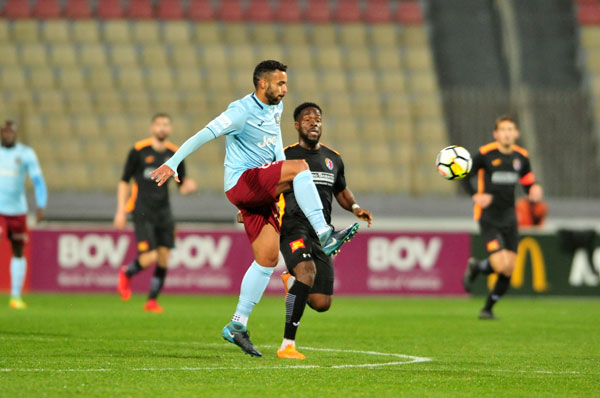 New signing Gianmarco Conti notched a late equaliser as Gzira United maintained their unbeaten record in the BOV Premier League with a 1-1 draw against Hamrun Spartans at the National Stadium on Friday.

This was the fifth draw in seven matches for Darren Abdilla’s side and now lie one point behind leaders Hibernians and two ahead of Valletta before the latter two face each other in a direct clash on Sunday. Hamrun, on the other hand, register an eighth consecutive positive result.

The Spartans had no less than four changes from the team which only managed to earn a point in a draw with Floriana as Karl Micallef, Orestis Nikolopoulos, Alain Donneil Moukanza and Njongo Priso replaced Caetano Calil, Ryan Darmanin, Kevin Tulimieri and Antonio Monticelli who left the club to join rivals Valletta. New signing Andre Scicluna was among the substitutes.

The Maroons, on the other hand, had Gianmarco Conti making his debut, replacing Edison Bilbao Zarate. Zachary Scerri was preferred to Nikolai Muscat.

Hamrun took the lead on the 14th minute when Njongo Priso served Marco Criaco on the left and the latter beat Haber with a diagonal shot.

Gzira replied with a header by Justin Mengolo five minutes from the end of the first half, ending high.

Early in the second half, Donneil Moukanza had a close range effort blocked by Haber and on the other side of the pitch, Justin Mengolo’s low effort was neutralised by Bartolo. A great freekick by Andrew Cohen ended just over the bar on the 55th minute but a few minutes later, Njongo Priso missed a great opportunity for Ħamrun, failing to connect off an inviting pass by Moukanza.

Hamrun seemed heading for victory but Gzira had other thoughts as on the 90th minute, Sofian Domoraud’s angled shot from the right was blocked into a corner by Bartolo and from the resulting corner, Gianmarco Conti’s overhead kick beat the Ħamrun custodian.