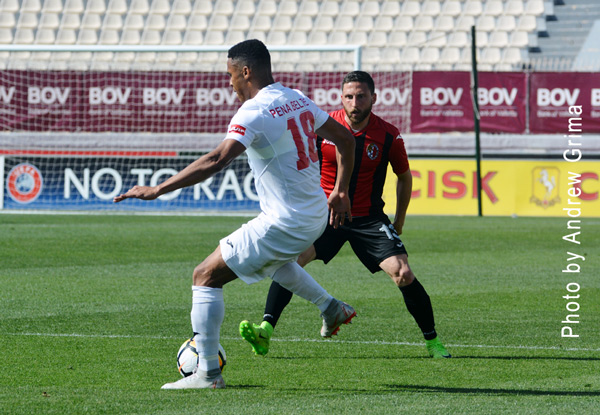 A dramatic equaliser by Donneil Alain Moukanza deep into stoppage time handed Hamrun Spartans a 1-1 draw with Valletta at the National Stadium on Saturday. A draw which puts the Citizens and Hibernians on level points and therefore a decider will determine the championship.

The Spartans, on the other hand, secured fourth place which could mean a place in the UEFA Europa League this summer should Valletta, Hibernians or Gzira United win the FA Trophy.

Valletta went close after less than one minute when off a cross by Miguel Angel Alba from the left, Mario Fontanella’s header was saved by Bartolo. On the 15th minute, following a good run by Santiago Malano, he served Fontanella on the left and the latter’s angled shot was deflected into a corner by Bartolo. From resulting corner by Alba, Fontanella’s close-range effort was neutralised by the goalkeeper.

The Citizens took the lead on 29 minutes when Mario Fontanella pounced on a back pass by Andre Scicluna from the right and slotted the ball past Bartolo.

Two minutes from the end of the first half, Hamrun went close to equalising with a Wilfried Domoraud effort ending just over the bar.

One minute from time, Valletta were reduced to ten men after Raed Ibrahim was sent off after receiving two yellow cards in a few seconds, first for time-wasting and then for applauding the referee’s decision.

Three minutes in added time, Hamrun notched the dramatic equaliser when off a long-distance cross by Triston Caruana, Orestins Nikolopoulos headed the ball in the direction of Donneil Alain Moukanaza who controlled the ball before hitting low past goalkeeper Henry Bonello.