Citizens leave it till late to beat Gzira 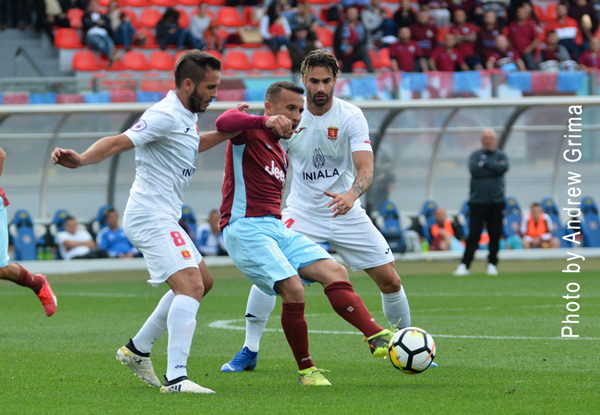 Valletta will be facing Balzan in the final of the FA Trophy as two late goals handed them a 2-0 win over Gzira United in the second semi-final at the National Stadium on Sunday.

The Citizens therefore stay on track in their bid to win a second consecutive double as they reach the twenty-eighth FA Trophy final in the history of the club.

City coach Gilbert Agius welcomed back Ryan Camilleri and Rowen Muscat but Steve Borg and Miguel Angel Alba were unavailable along with the suspended Joseph Zerafa. The Maroons, on the other hand, were in full strength, apart from Amadou Samb.

Valletta were clearly a better side during the first half. On the 8th minute, Mario Fontanella’s curling shot, following a cross from the right, was parried by Haber. Three minutes later, Nwoko served Malano on the right and off the latter’s cross, Bojan Kaljevic hit wide from close range. On the 17th minute, Justin Haber turned into a corner a Kyrian Nwoko header following a corner by Fontanella from the right.

Gzira missed a good opportunity on the 23rd when Edison Bilbao Zarate hit wide from an ideal position when served by Haruna Garba from the right. However on the 35th, Valletta threatened once again with a Santiago Malano header, which was parried by Haber, following a corner by Fontanella. Haber came to the rescue once again two minutes later, first by blocking a Nicholas Pulis effort from the right and then off the rebound, Kyrian Nwoko’s fine effort was again neutralised by the Gzira goalkeeper.

On the 70th minute, Valletta missed an excellent opportunity as Bojan Kaljevic, served by Nicholas Pulis, hit high from an ideal position inside the area. Three minutes later, off a cross by Fontanella, Kaljevic headed high.

Valletta finally managed to break the deadlock on the 78th minute when off a Mario Fontanella corner from the right, there was a clearance by the Gzira defence, the ball reached Rowen Muscat whose low shot beat Haber.

The Citizens doubled the score on the 91st minute when Santiago Malano entered the penalty area from the right and served the unmarked Bogdan Gavrila who controlled before beating Haber with a diagonal shot.