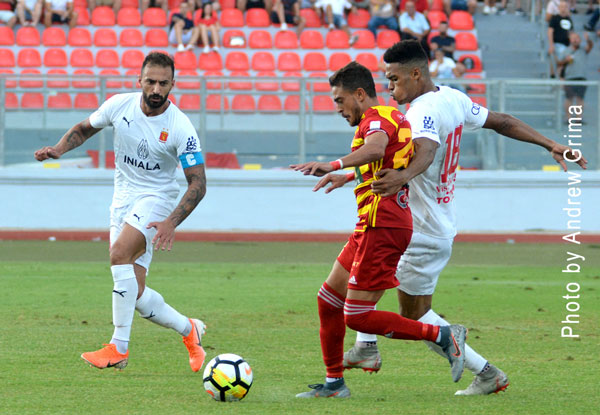 Birkirkara held champions Valletta in a 2-2 draw in this weekend’s big match from the BOV Premier League at the National Stadium on Saturday.

For the Citizens, this was the second draw in five matches which puts them on the eight-point mark, three points behind the leaders. Birkirkara, on the other hand, remain second from bottom on three points thanks to this third draw in the last three matches as they continue to chase their first win.

Valletta took the lead on the 10th minute when they were awarded an indirect freekick inside the area after Andrew Hogg grabbed the ball following a back-pass by Cain Attard; Douglas Packer served Steve Borg who managed to slot the ball past the Birkirkara defence.

On the 24th minute, Caio Henrique Prado served Miguel Angel Alba from the right but the latter failed to connect.

Birkirkara equalised on the 38th minute when Maurizio Vella sent Caio Henrique Prado through on the right and the latter rounded Borg before beating Henry Bonello in style.

Valletta regained the lead on the 57th minute when off a cross by Kevin Tulimieri from the left, Enmy Pena Beltre headed home past goalkeeper Andrew Hogg.

Caio Henrique Prado went close for Birkirkara with a close-range header following a cross from the left.

On the 69th minute, Birkirkara levelled matters. Caio Henrique Prado was brought down inside the area by Jean Borg and from the penalty spot, Miguel Angel Alba made no mistake to restore equilibrium.

Nine minute from time, substitute Michael Mifsud tested Henry Bonello with a powerful shot from inside the area which was, however, blocked into a corner.