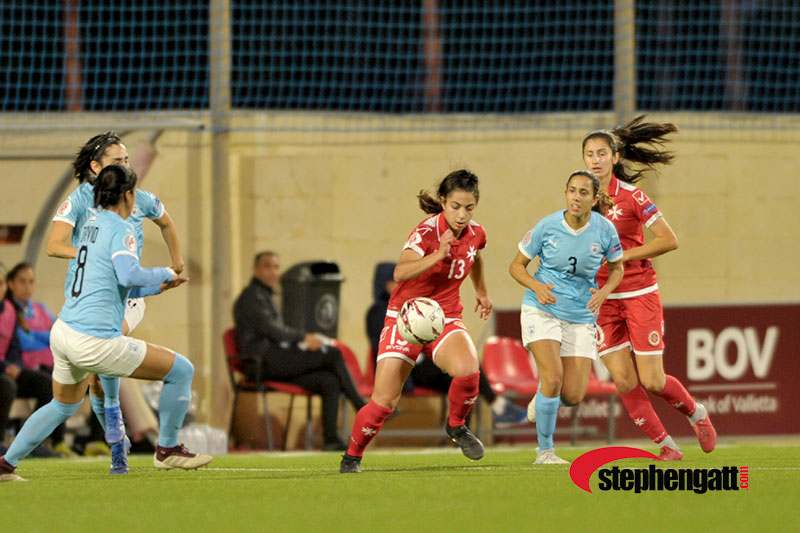 The Malta women’s national team earned its first point in Group B of the UEFA Women’s EURO qualifying round group stage thanks to a 1-1 draw with Israel at the Centenary Stadium on Thursday.

The team continued to build on the fine performance against Italy and with a bit more of luck, Malta could have even secured victory. This promises well for the coming games. In fact, Mark Gatt’s girls will be in action once again on Tuesday against Italy in Castel di Sangro.

Israel went close with an Eden Avital effort on the 12th minute but four minutes later, captain Dorianne Theuma missed a good chance for Malta. On the 31st, the visitors took advantage of a defensive error by the locals and Eden Avital served Sharon Beck but goalkeeper Janice Xuereb managed to block the latter’s effort.

Rachel Cuschieri went close with a well-taken freekick on the 36th minute but the ball ended just over the bar.

One minute later, Malta managed to take the lead thanks to Maria Farrugia whose diagonal shot from the right beat goalkeeper Hanit Schwarz.

Two minutes in the second half, Malta could have doubled the score when off an intelligent pass by Rachel Cuschieri for Brenda Borg, the latter hit just wide when alone in front of the goalkeeper. Two minutes later, Maria Farrugia concluded a fine solo effort with a close-range effort which was blocked by Schwarz into a corner.

Israel levelled matters on the 63rd minute thanks to Sharon Beck whose powerful shot from outside the area gave goalkeeper Janice Xuereb no chance.

On the 80th minute, Jade Flask came to the rescue as she cleared off the goal line a goal-bound effort by Goor and five minutes later, Xuereb performed a good save in two attempts on Avital.

However in stoppage time, Malta could have notched the winner when Dorianne Theuma had a fine effort, direct from a corner, saved with particular difficulty by teh Israel goalkeeper.