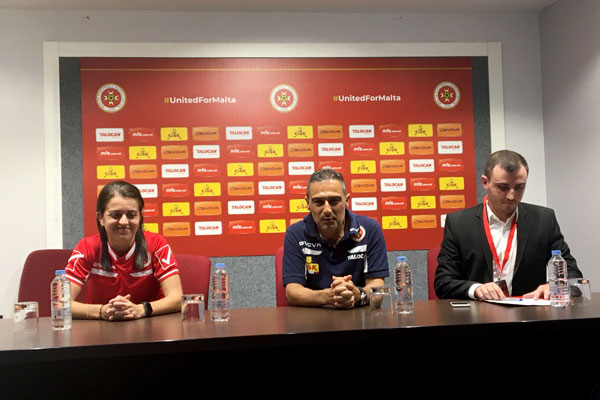 The Malta women’s national team host Italy in another match from Group B of the UEFA Women’s EURO qualifiers at the Centenary Stadium on Friday, kick-off at 17:30.

This will be a high profile match for the team led by coach Mark Gatt as women’s football in Italy is currently in the limelight after Italy reached the quarter-finals of the FIFA Women’s World Cup in France last summer, also considering the investment by top clubs to set up women’s teams in the last two years.

Italy defeated Israel 3-2 and Georgia in two matches away from home in their first two outings in Group B. Malta, on the other hand, suffered a heavy 8-0 defeat to Denmark in the opening game in Viborg and then lost 2-0 to Bosnia-Herzegovina in Sarajevo.

Addressing the media on Thursday, Gatt said that after the opening two matches, he feels the team is well prepared for this game.

“We learned from these games and now we are better prepared. It is easy to speak about problems we face but now it was more important to speak about this game.”

Mark Gatt added that he feels that the current group of players is the best he had so far.

“I am proud to say that we are able to field one of our best formations despite the absence of some players.”

“The future is bright with a number of players based abroad. I am sure that in the coming months, there will be other players who will get to move abroad.”

When asked about his objectives regarding this game, Gatt said “Of course, our targets are different than those of Italy. I am confident we will do our best. We know their strength but we are not afraid. We are looking forward for the game. We want to show that the level of our players is rising. We hope the level improves further but for this to take place, more investment was necessary.”

The Malta coach would not specify with which result he would be satisfied. “If we manage to give our hundred per cent and fight for every ball, I would be happy. “

“There is no doubt the level of the game is rising. In Italy, there was huge investment by clubs. Here we need to work harder.”

When asked about his plans for this game, Mark Gatt said “You need to find a balance between trying to get the best out of your players and adapt to the team you are facing but you should base everything on the strength of your players.”

Meanwhile captain Dorianne Theuma said this game provides a fine experience and occasion for the players considering that the chances to face such teams were rare.

The experience of the senior players could play an important role.

In fact, Theuma added “When we faced England and Spain, those were demanding matches. From my side, I try to help the younger players keep their feet on the ground. “

Thirty-year old England-born Emma Lipman should be making her international debut after playing a friendly match against Bolton Ladies. She played for Coventry City, Leeds United, Leeds Carnegie and Sheffield in England before moving to Italy where she played for Verona and Roma before joining Florentia San Gimignano this summer.

Women’s League top-scorer Haley Bugeja is not eligible to play for the national team as she is still under-age and will only be eligible as from January.

Meanwhile Italy coach Milena Bertolini admitted that although they start as firm favourites, it was of utmost importance to show respect and never under-estimate your opponents. She said that the team’s objective was to win every game, considering that only the winner qualifies automatically for the finals.

Bertolini is not particularly worried about the fact that the match will be played on an artificial turf pitch. She said that although this could be of an advantage for Malta, for Italy to make it to the Women’s EURO, they had to beat all obstactles.