Hamrun Spartans are the only team with maximum points from two matches as they defeated Tarxien Rainbows 3-1.

The Spartans were the better side right from the start and although Tarxien managed to equalise following Hamrun’s early lead, they soon regained the lead and added another goal after the break to take home the three points.

For Tarxien, this was another disappointing performance after failing to impress in the draw with Marsaxlokk last week.

Hamrun had one change from the team which defeated Qormi as Aaron Attard replaced Steve Bonnici. On the other hand, for Tarxien, Ryan Mintoff and Mark Tanti replaced Sergio Pacheco De Oliveira and Gianluca Calabretta. The former was unavailable while the latter was included as a substitute.

Following a quiet start, the Spartans had the first attempt at goal when off an inviting cross by Ryan Fenech from the left, Marcelo Pereira reached the ball before Massimo Grima heading high on the 10th minute. Two minutes later, a direct freekick by David Camilleri ended just wide.

Hamrun managed to take the lead on 15 minutes when off a cross by Dene Shields, Marcelo Pereira controlled before hitting low past goalkeeper Anthony Curmi.

Tarxien replied with a cross by Ryan Grech from the left, from which a header by Mark Tanti was saved by goalkeeper Ivan Casha on the 17th. A minute later, in a swift counter-attack for Hamrun, Dene Shields had two shots from the left blocked by defenders.

However on 22 minutes, Roderick Fenech handled the ball inside the area following a shot by Ryan Grech. Referee Paul Caruana ordered a penalty and Cristiano Dos Santos Rodrigues converted.

Hamrun continued to hold the initiative and went close with a Dene Shields header following a cross by Ryan Fenech from the left on 28 minutes but his attempt just missed the target.

After the break, the Rainbows tried hard to restore equilibrium but the Hamrun rear-guard managed to keep them under control.

Then on 64 minutes, Hamrun missed an excellent chance to increase the lead when Rupert Mangion released Marcelo Pereira on the right and the latter advanced into the area before trying his luck with a powerful shot which scraped past the post. A curved shot by Ryan Fenech ended just wide ten minutes later.

Hamrun sealed the issue on 81 minutes as Dene Shields rounded goalkeeper Anthony Curmi to place the ball at the back of the net.

An incident after the final whistle in which Gianluca Calabretta hit Lee James Agius could have sparked more serious incidents. However the Tarxien midfielder escaped with a yellow card.

no images were found

Newly-promoted Marsaxlokk earned their second point in their second goalless draw, this time with Sliema Wanderers.

The two teams disappointed especially during the first half. After the break, both showed some improvement although they failed to break the deadlock.

The Wanderers once again lacked Alex Muscat, Roderick Bajada and Jean Pierre Mifsud Triganza. They had two changes from the team which lost to Birkirkara as Adam Spiteri and James Paris replaced Miguel Ciantar and the suspended John Mintoff. They had Julian Briffa making his debut when he was included as a substitute, replacing the injured Clayton Failla.

For Marsaxlokk, Dylan Kokavessis and Trevor Templeman were preferred to Martin Deanov and Peter Pullicino.

The first half lacked goal-mouth action with the two goalkeepers – Reuben Gauci for Marsaxlokk and Viktor Szentpeteri for Siema – hardly being tested, except for Dylan Kokavessis effort early in the game which was neutralised by the Hungarian goalkeeper.

The match slowly came to life after the break. On 61 minutes, a well-taken freekick by Ruben Guerreiro was parried by Szentpeteri. A long-distance shot by Malcolm Licari ended just over the bar a minute later.

On the other side of the pitch, Mark Scerri managed to enter the penalty area but his conclusion was deflected into a corner by Carlo Mamo. A cross shot from the right by Clifford Gatt Baldacchino was saved in two attempts by Reuben Gauci on 67 minutes.

On 76 minutes, Szentpeteri managed to turn into a corner a direct freekick by Martin Deanov.

James Paris was voted BOV Player of the Match. 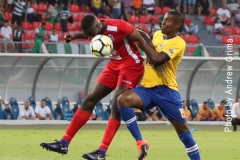 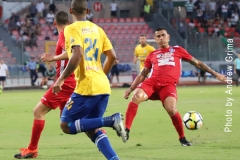 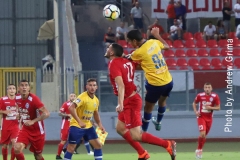 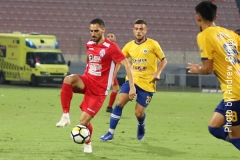 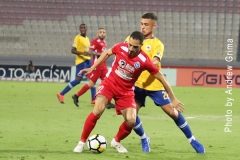 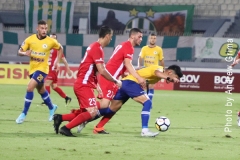