Sliema Wanderers moved second on level points with Birkirkara and one point behind leaders Valletta as they registered a narrow 1-0 win over Vittoriosa Stars despite playing in ten men for half an hour.

The two teams shared the exchanges during the first half but after the break, Sliema managed to score the all-important goal which condemned Vittoriosa to a fourth defeat in four matches.

Sliema had one change from the team which defeated Hamrun in their last outing with Jean Pierre Mifsud Triganza replacing James Paris as they lacked once again Alex Muscat, Steve Bezzina and Clayton Failla. On the other hand, Edison Luis Dos Santos and Jonathan Xerri were missing for Vittoriosa.

A shot by Leighton Grech for Vittoriosa was neutralised by Szentpeteri on 27 minutes. On the other side of the pitch, Jackson Lima, served by Obinna Obiefule, had a low shot ending just wide on 32 minutes. Five minutes later, Viktor Szentpeteri performed a good save on a powerful shot by Anthony Ewurum from the left.

The Wanderers were reduced to ten men on 59 minutes after Beppe Muscat received a second yellow card for a foul on an opponent.

However Sliema still managed to take the lead when off a pass by John Mintoff from the left, Obinna Obiefule hit low past goalkeeper Simon Agius.

Four minutes from time, Anthony Ewurum missed a golden opportunity to level matters as his first attempt from close range was partially saved by Szentpeteri and off the rebound, the Nigerian striker’s weak shot was parried without particular difficulty by the Sliema custodian.

In added time, the Wanderers appealed for a penalty after Obinna Obiefule was apparently brought down inside the area by Kevin Mifsud.

John Mintoff was voted BOV Player of the Match. 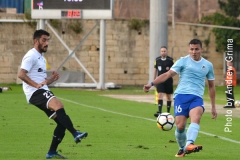 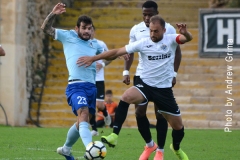 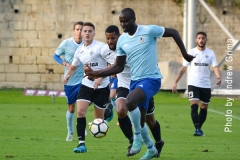 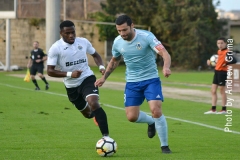 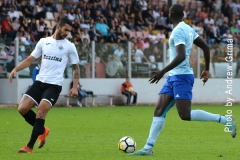 In the second match, Qormi returned to winning ways as they came from behind to beat Tarxien Rainbows 2-1. A win which puts Qormi in fourth place together with Hamrun, Marsaxlokk and Floriana, leaving the Rainbows second from bottom on four.

Stephen Azzopardi’s side showed greater determination, especially during the second half but Tarxien had the chances thanks to which they could have earned a point from the game.

Making his return for Tarxien was Daniel Mariano Bueno. The Brazilian striker and Manuel Caruana replaced Gianluca Calabretta and Mark Tanti in the starting line-up. Qormi had two changes from the team which lost to Valletta as Cleavon Frendo and debutante Vinicius Da Silva replaced Kang Hojung and Jonathan Bondin.

The Rainbows were unlucky to lose goalkeeper Anthony Curmi injured on the 12th minute as he tried to stop Abubakar Bello-Osagie from concluding. He was replaced by David Cassar.

However they managed to take the lead on the 18th minute when Cristiano Dos Santos Rodrigues received a pass on the right and after rounding the goalkeeper hit home with an angled shot from the left.

Qormi replied with a freekick from the right by Stefan Giglio from which Vinicius Da Silva headed just wide on 26 minutes. Two minutes later, a Joseph Farrugia freekick just missed the target. On the other side of the pitch, a goal-bound header by Cristiano was cleared off the goal-line by Roderick Sammut on 29 minutes.

Two minutes in the second half, Daniel Mariano Bueno concluded a good run on the right by rounding the goalkeeper but his angled shot hit the foot of the post.

On 65 minutes, Tarxien goalkeeper David Cassar saved partially a Kosta Bjedov effort from outside the area. The ball was cleared into a corner by a defender and from the resulting corner by Joseph Farrugia, the ball reached Cleavon Frendo whose powerful shot beat Cassar to make it 1-1.

Qormi took the lead on 74 minutes when off a cross from the right by Matthew Bartolo, Abubakar Bello-Osagie’s fine first-time effort gave David Cassar no chance.

A minute later, Tarxien went close to restoring equilibrium, first with a shot by Daniel Mariano Bueno which was blocked and off the rebound, Justin Grioli’s powerful shot was cleared off the goal-line by Jason Lee Vandelannoite.

In added time, Daniel Mariano Bueno missed a good opportunity for Tarxien hitting wide from close range and then Kosta Bjedov had the opportunity to seal the issue when he advanced all alone but his conclusion was blocked by David Cassar. Finally a powerful drive by substitute Gianluca Calabretta from the right was deflected into a corner.