Hamrun Spartans and Birkirkara shared the spoils in a 1-1 draw in a clash from the BOV Premier League at the Victor Tedesco Stadium on Friday.

The Spartans therefore failed to take sole leadership but stay in second place one point behind leaders Valletta. Birkirkara, on the other hand, have now gone three matches without a win and are now joint-fourth on eight points.

Birkirkara had three changes from the team which lost to Marsaxlokk as goalkeeper Michael Fraser, Ryan Scicluna and Andrew Decesare replaced Manuel Bartolo, Ryan Harding and Emiliano Lattes. The Scottish goalkeeper was making his debut for the Stripes. Shaun Bajada, Rowen Muscat and Alan Tabone were all ruled out through injuries.

Hamrun lacked once again striker Dene Shields but welcomed back Martin Hrubsa and Steve Bonnici after serving a one-match ban although the latter started on the bench.

The Spartans had the first attempt at goal when Marcelo Pereira served Peter Anizoba on the left but the latter’s attempt was blocked by goalkeeper Michael Fraser into a corner. Birkirkara replied with a cross from the left from which Ryan Scicluna flicked the ball just wide.

The Stripes managed to take the lead on 23 minutes when off an Andrew Decesare freekick from the right, Michael Galea headed the ball home past goalkeeper Ivan Casha.

Hamrun levelled matters three minutes later when off a cross by Peter Anizoba from the right, Marcelo Pereira deflected the ball past goalkeeper Michael Fraser from close range with the ball ending at the back of the net.

Eight minutes from the end of the first half, Paul Fenech went close with a long-distance shot which just missed the target.

Marcelo Pereira went close for the Spartans with a powerful shot from the left on 65 minutes which was parried by Fraser. On the other side of the pitch, Simon Zahra served Emilano Lattes whose fine effort from outside the area was deflected into a corner by Hrubsa. Then on 69 minutes, following a cross from the left, Michael Galea rounded the goalkeeper but missed the target.

A good run on the left flank by substitute Karl Pulo on 83 minutes ended with a low shot which was blocked by Ivan Casha. A minute later, Massimo Grima came to the rescue clearing off the goal line a cross shot by Terence Vella.

Paul Fenech was voted BOV Player of the Match. 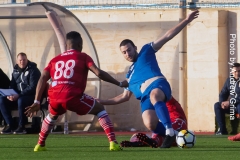 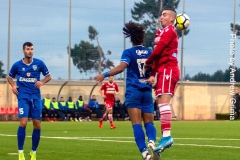 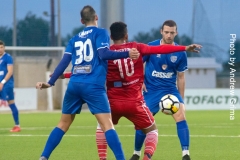 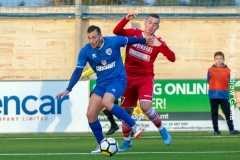