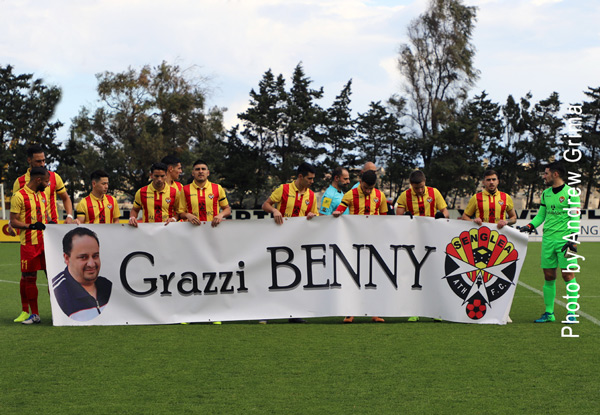 Valletta failed to keep the pace with Hibernians after being held in a 3-3 draw by Senglea Athletic at the Hibernians Stadium on Saturday. A draw which puts the Paolites in second place, two points behind leaders Hibernians.

Like Valletta, Senglea were coming from four consecutive wins and Vincenzo Potenza’s side confirmed their recent fine form as they earned another precious point in their bid to secure their Premier League status.

Valletta had a perfect start, taking the lead on the 4th minute thanks to Matteo Piciollo who slammed the ball home off a cross by Enmy Pena Beltre.

However Senglea levelled matters on the 23rd thanks to a powerful drive by Diego Venancio which gave goalkeeper Henry Bonello no chance.

The Citizens regained the lead on the 37th minute thanks to an own goal by El Mehdi Sidqy who headed the ball past Farrugia following a cross by Miguel Angel Alba.

Four minutes in the second half, Senglea equalised when Gonzalo Julian Leyton sent Augusto Rene Caseres through and the latter hit hard past the Valletta goalkeeper.

Diego Venancio made it 3-2 for Senglea on the 82nd minute with a great direct freekick.

However two minutes from time, substitute Kyrian Nwoko restored equilibrium as he tapped the ball home off the rebound after a Fontanella effort from close range was blocked by the goalkeeper.