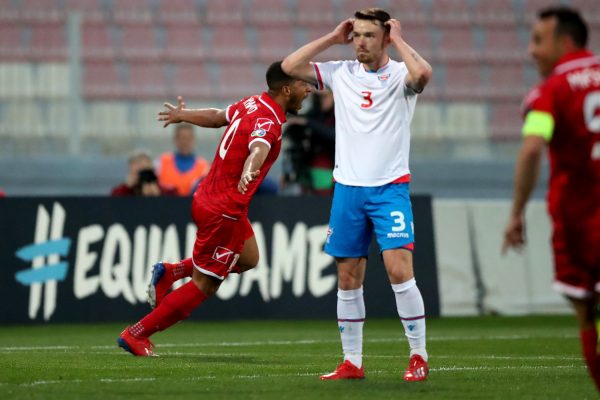 Despite playing for half an hour in ten men, Malta claimed the first three points in the EURO 2020 qualifying campaign as they defeated the Faroe Islands 2-1 in the first match from Group F of the European Qualifiers at the National Stadium on Saturday.

The locals took the lead on the 13th minute when off a cross from the left, Kyrian Nwoko headed home past goalkeeper Nielsen.

Five minutes later, Malta threatened with another Kyrian Nwoko header ending just wide off a cross by Joseph Mbong from the left. Malta maintained the pressure and Michael Mifsud exchanged the ball with Paul Fenech before hitting high from the edge of the area on the 21st.

Nine minutes in the second half, the Maltese protested harshly after Odmar Faero halted Michael Mifsud’s solo run with a tackle from behind but referee Thorarinsson waved play on.

On the 62nd minute, Malta were reduced to ten men after Andrei Agius handled the ball inside the area after shot from close range by Hansson. Referee Thorarinsson was quick to indicate the penalty spot. However Henry Bonello performed an impressive save on Brandur Hendriksson to keep the Faroe Islands at bay.

Ray Farrugia replaced Corbalan with Zach Muscat in order to add another defender and a few minutes later, replaced Mifsud with Joseph Zerafa as now Malta turned to a 5-3-1 formation.

Malta doubled the score on the 77th minute. A solo run by Joseph Mbong was interrupted by Atli Gregersen with a foul inside the area. The referee ordered a penalty and Steve Borg converted from the penalty spot.

Seven minutes from time, Viljomur Davidsen could have reduced the gap when he received a cross by Rolantsson from the right but his close-range effort was neutralised by Bonello.

The referee ordered seven minutes of added time and on the 98th, the visitors reduced the gap when off a cross by Faero, Rolantsson headed the ball in the direction of Jakup Thomsen whose header from close range beat Bonello.