Malta takes on Spain in front of a packed National Stadium 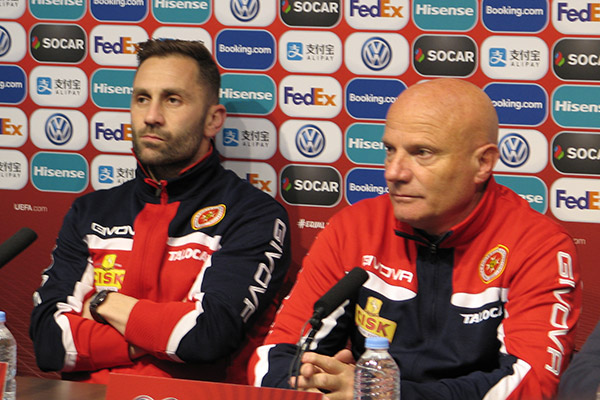 Following Saturday’s fine 2-1 win over the Faroe Islands, Malta faces Spain in another match from Group F of the European Qualifiers leading to EURO 2020 at the National Stadium on Tuesday, kick-off at 20:45.

The win over the Faroe Islands was the first competitive win at home in almost thirteen years and it was definitely a morale-boosting win for Ray Farrugia’s boys. But undoubtedly Spain are a much stronger side and although they lost two out of the four matches of the UEFA Nations League to finish second in a group which featured England and Croatia, they are now eager to end Group F on top.

The clash between Malta and Spain brings back, especially for the Spanish fans, memories of the 12-1 win in Seville in December 1983 in the EURO ’84 qualifiers but somehow they forget that in that same campaign, seven months earlier, Spain had to sweat hard to beat Malta 3-2 at Ta’ Qali. Since then Spain had defeated Malta 2-0 in January 1989 and 3-0 in December 1996 in two World Cup qualifiers at Ta’ Qali.

Addressing the media on Monday, Farrugia admitted it will be difficult but is looking forward for the game.

“We know we are playing against one of best teams in world. I am a big fan of Spanish football. This should be an interesting game for us. We are playing in front of a full house. It will definitely be a good attraction for Maltese supporters.”

“We started our campaign with a win which gave us a big boost. However the game against the Faroe Islands is now over. We enjoyed it … considering that after all these years, we got the three points. But now we concentrate on this game.”

The Malta coach has not ruled out making further changes apart from the replacement of the suspended Andrei Agius.

“We are currently assessing the fitness of two players and we will probably make some changes. We will see after tonight’s session and then we will take a decision tomorrow morning. “

“Considering the format of the qualifiers, we have to play two games in three days. Some players can play two games, others no. Therefore you would need fresh legs.”

Henry Bonello should start in goal with Steve Borg, Jonathan Caruana and Zach Muscat and possibly Joseph Zerafa at the back, Rowen Muscat, Paul Fenech and Joseph Mbong in midfield with Juan Corbolan and Michael Mifsud supporting Kyrian Nwoko in attack.

The Spanish media seemed interested in asking Farrugia only about the game in Seville. Farrugia was a member of that team but had to be substituted on the 72nd minute after sustaining an injury.

“That game is the past. I was badly injured and spent eight months on the sidelines. Obviously my club at the time, Melita Eagles, were not happy. I. left Spain for Australia in crutches.”

Farrugia was also asked whether this represented a chance for revenge to which he said “In life, I do not believe in vendetta. This is football. Football brings people together.”

When asked regarding his plans for Tuesday’s game, the Malta coach said “We are preparing for a different kind of game. Spain follow the Johan Cruyff school. Then there were Pep Guardiola, (current Spain coach) Luis Enrique and Vincente Del Bosque. One could only learn from these coaches. They are one of the best teams in the world and we need to have the right approach.”

Paul Fenech said the players were fully concentrated ahead of this game.

Fenech added that although the squad now features several younger players, these were not short of experience and performances by players like Joseph Mbong and Juan Corbolan in recent matches and also Matthew Guillaumier on his debut were a clear example.

Meanwhile Spanish coach Luis Enrique, who was appointed as national coach last summer, said he is not worried that in recent games, Spain seemed to struggle to score goals.

“We have been together for seven games. We are a big group working together. There is a normal transition like in any other team.”

“We had good start (a 2-1 win over Norway) and we need to stay focussed all the time.

Spain’s attraction and Malta’s 2-1 win over the Faroe Islands on Saturday made sure that the National Stadium was completely sold out.

Malta vs Spain will be controlled by referee Andrew Dallas of Scotland.