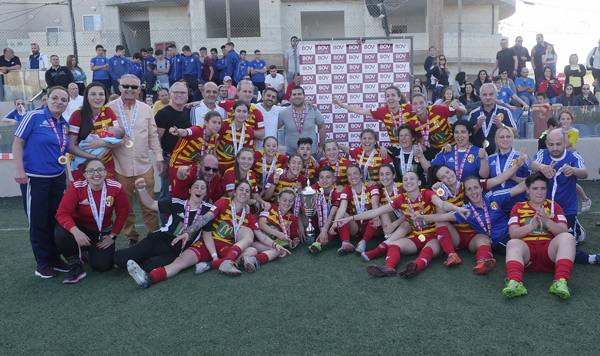 Birkirkara were crowned BOV Women’s Football Champions for the eighth time in their history in a memorable season where the team remained unbeaten throughout the competition.

On Wednesday, Birkirkara defeated Mgarr United 4-1 at the Charles Abela Stadium. Kailey Willis put Birkirkara ahead on the 14th minute but Roxanne Micallef equalised on the half-hour. Raina Giusti restored the lead on the 38th and late in the game, Willis scored twice on the 75th and 90th to hand Birkirkara the three points.

In another match, Hibernians registered a most comfortable 11-0 win over Kirkop United at the Mgarr Ground. The Paolites went six goals ahead in the first half thanks to a brace by Kayleigh Chetcuti on the 12th and the 40th, a Jade Flask hat-trick on the 24th, 31st and 35th and a goal by Jessica Lee Dimech on the 42nd. In the second half, Hibs added more goals thanks to Chloe Ann Ellul on the 51st, Ruth Steer Chetham on the 59th, Elena Sissons one minute later, Shona Zammit on the 81st and Dorianne Theuma on the 88th.

In Section B, Swieqi United and Raiders (Luxol) shared the spoils in a goalless draw at the Mgarr Ground. The two teams are yet to meet in their final league match on May 7. A match which would determine the winner of Section B as the two teams currently share the top spot.

In another match, a brace by Leah Alice Ayres on the 38th and 42nd handed Mosta a 2-0 win over Fgura United at the Charles Abela Stadium.