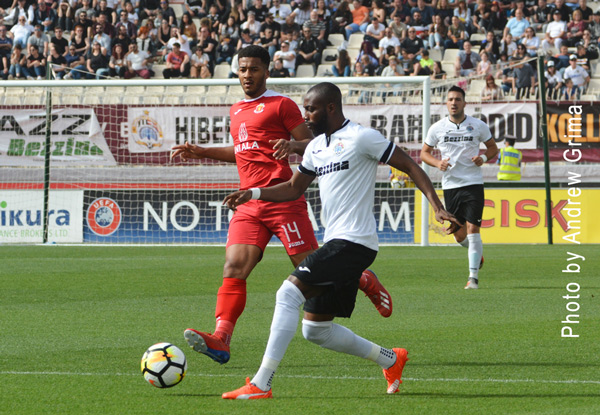 Valletta were crowned BOV Premier League champions as they defeated Hibernians 4-2 on penalties following a 2-2 draw at the end of extra-time in a most dramatic Championship Decider at the National Stadium on Saturday.

Hibernians took the lead early in the game but the Citizens turned the score in their favour with two goals, only for the Paolites to level matters late in the second half of extra-time. However, in the penalty shoot-out, Valletta scored four while Hibernians missed twice.

This was the twenty fifth title for the Citizens in the history of the club to match the same number of championships won by their eternal rivals Floriana and one less than Sliema Wanderers.

For Valletta, this was also the second consecutive league title and the sixth one in nine years – the seventh since Victor Sciriha was appointed Valletta FC president. It is also the first championship for coach Gilbert Agius, who took over as their new coach, replacing Danilo Doncic, last month. Earlier this year, Valletta won the BOV Super Cup, defeating Balzan 2-1.

This decider was necessary after both Valletta and Hibernians had ended their league commitments on level points as in their final league games, Hibernians defeated Balzan 5-1 and Valletta were held in a 1-1 draw by Hamrun Spartans.

Hibernians had one change from the team which defeated Balzan 5-1 last week as Nemanja Radojevic replaced Dunstan Vella. Valletta, on the other hand, lacked the suspended Joseph Zerafa and Raed Ibrahim Saleh. From the draw against Hamrun, Zerafa and Ryan Camilleri made way for Jean Borg and Bojan Kaljevic.

The Paolites managed to take the lead on the 12th minute when following a good run on the left flank by Isaac Ntow, he crossed the ball for Taylon Nicolas Correa Marcolino who rose high to head home from close range.

Valletta replied with a powerful shot by Miguel Angel Alba from outside the area ending wide on the 14th minute. Six minutes later, Hibs went close once again as Taylon advanced on the right before serving Jake Grech whose powerful drive was neutralised by Henry Bonello. Hardly a minute later, off a cross by Alba from the left, Kyrian Nwoko’s volley was parried by Jovicic.

The Citizens missed a good opportunity when Bojan Kaljevic failed to connect off an inviting cross by Jean Borg from the left after the latter had rounded two defenders on the 26th. A minute later, Bonello had to rush out of the area to halt a fine run by Taylon on the left flank. On the 29th, Ntow exchanged the ball with Taylon before testing the Valletta goalkeeper with a powerful shot from the left. A Miguel Angel Alba free kick from the left was neutralised by the Hibernians goalkeeper on the 35th.

In added time, a Santiago Malano freekick was deflected, leaving Nwoko and Kaljevic alone in front of the goalkeeper but they failed to place the ball at the back of the net. A few seconds later, Mario Fontanella tested Jovicic with a shot from the edge of the area.

Valletta increased the pressure in the second half and on the 54th minute, Bojan Kaljevic’s close range header, off a cross by Alba from the left, was turned into a corner.

However, five minutes later, Valletta were not to be denied. Following a corner from the right, Kyrian Nwoko’s header was blocked by Jovicic, Santiago Malano’s header off the rebound was also blocked by the Hibs goalkeeper, Bojan Kaljevic anticipated Marcio Barbosa but hit the crossbar with Jonathan Caruana placed the ball at the back of the net.

The Citizens maintained the pressure and on the 67th minute, Mario Fontanella’s powerful shot from the right was parried by Jovicic. Four minutes later, substitute Bogdan Gavrila tried his luck with a powerful drive ending wide.

In added time, Rowen Muscat almost notched the winner with a rising shot from the right which was destined for the top left corner but the Hibs goalkeeper managed to turn the ball into a corner.

With the score still draw at the end of regular time, the game went into extra-time.

Eight minutes in the first half of extra-time, Valletta forged ahead. Kyrian Nwoko sent Mario Fontanella through who tried to lob the ball over Marcio Barrosa, who however headed the ball down, and the Italian striker slotted the ball past Jovicic from the right.

Bogdan Gavrila went close to adding another just before the end of the first half of extra-time but his curling shot from the right scraped past the post.

In the second half of extra-time, the Paolites tried to react but the Valletta rear-guard was keeping their opponents under control and on the 117th minute, in a swift counter-attack on the left flank, Kyrian Nwoko managed to avoid the challenge by Andrei Agius and try his luck with a diagonal shot which just missed the target.

Marco Sahanek hit the upright for Hibernians, Miguel Angel Alba scored for Valletta; Jake Grech scored for Hibs, Santiago Malano scored for Valletta, Tiago Adan Fonseca scored as well for the Paolites and Bogdan Gavrila made it 5-4. Taylon Correa’s penalty was parried by Bonello while Mario Fontanella scored the decisive penalty for the Citizens.