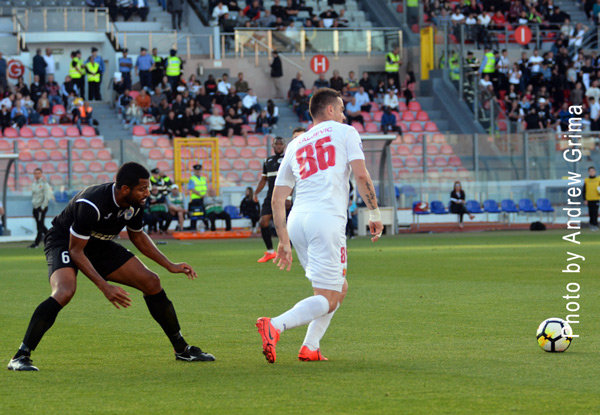 Valletta came back from two goals down to beat ten-man Hibernians 3-2 after extra-time in the last quarter-final of the FA Trophy at the National Stadium on Wednesday. The Citizens therefore secure a place in the semi-finals where they will be facing Gzira United in the second semi-final on Sunday.

Hibernians, on the other hand, had Timothy Tabone Desira, Dunstan Vella and Marcelo Dias in the starting line-up as Andrei Agius and Isaac Ntow were suspended while Jake Grech was among the susbtitutes.

Hibernians took the lead on the 11th minute when Marco Sahanek exchanged the ball with Timothy Tabone Desira on the left, inside the area, before slotting the ball past Bonello.

Nine minutes later, the Paolites doubled the score when Bjorn Kristensen sent Taylon through on the right and the latter’s assist was well-met by Joseph Mbong who tapped the ball home.

Five minutes in the second half, Hibs had Marcelo Dias sent off by referee Stefan Pace for serious foul play on Gavrila.

Valletta pulled one back on the 72nd minute when off a cross by Steve Borg, Bojan Kaljevic hit low past goalkeeper Marko Jovicic.

Six minutes from time, Valletta notched the equaliser when off a Mario Fontanella freekick from the left, substitute Nicholas Pulis’s powerful header beat the Hibs custodian.

With the score 2-2 at the end of the ninety minutes, the game went into extra-time.

Twelve minutes in the first half of extra-time, Valletta went ahead for the first time when off a cross by Mario Fontanella from the left, Bojan Kaljevic flicked the ball home past Kaljevic from close range.

One minute from the end of the second half of extra-time, Hibernians could have equalised but Bjorn Kristensen’s header, off a Marco Sahanek corner from the right, hit the crossbar.