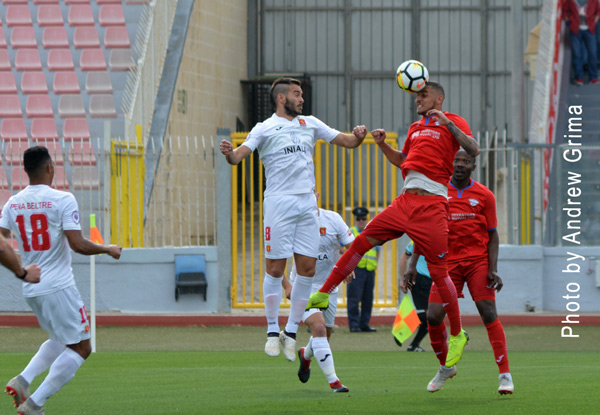 Alfred Effiong was a four-goal hero and scored the decisive penalty as Balzan won their first ever major honour, winning the FA Trophy. Balzan defeated champions Valletta 9-8 on penalties following a 4-4 draw at the end of extra-time in the final at the National Stadium on Saturday.

Balzan will be therefore representing Malta in the UEFA Europa League along with BOV Premier League runners-up Hibernians and third placed Gzira United.

It was an impressive performance by Effiong who managed to score Balzan’s four goals. Balzan were a better side for most of the first forty five minutes but Valletta equalised towards the end of the first half. However Balzan were quick to regain the lead thanks to a controversial goal which sparked harsh protests. Mid-way through the second half, Valletta levelled matters to force extra-time. In extra-time, Balzan scored twice to build a comfortable lead but Valletta scored twice to equalise and therefore the penalty shoot-out had to determine the winner. Valletta missed one penalty while Balzan scored the five penalties to secure victory.

Balzan went close on the 2nd minute with a close-range header by Alfred Effiong following a corner from the right by Ricardo Calixto Correa.

Six minutes later, Balzan managed to take the lead as Uros Ljubomirac sent Alfred Effiong through and the latter advanced into the area before beating Bonello with a diagonal shot from the right.

The Citizens’ reaction was weak and it was only seven minutes from the end of the first half that Fontanella served Kyrian Nwoko on the right but the latter’s effort hit the side netting.

However on the 40th minute, Valletta managed to equalise when Steve Bezzina failed to clear a cross by Raed Ibrahim Saleh and Kyrian Nwoko slammed the ball past Henry Bonello.

Three minutes later, Balzan regained the lead. Steve Pisani served Alfred Effiong on the left and the latter slotted past Bonello. A goal which brought harsh protests by the Citizens as the assistant referee signalled Effiong’s offside position but the referee overruled his assistant as defender Steve Borg had deflected the ball before it reached Effiong, adjudging his deflection as a pass.

Seven minutes in the second half, Kaljevic sent Mario Fontanella through and the latter’s close-range effort was blocked by Mintoff. Three minutes later, off a cross from the left by Enmy Pena Beltre, Fontanella deflected the ball for Bojan Kaljevic who chested the ball down before hitting the ball sky high.

Valletta restored equilibrium on the 72nd minute when Bogdan Gavrila’s free kick from the right was partially saved by Sean Mintoff and Enmy Pena Beltre slammed the ball past the Balzan goalkeeper.

On the 90th, the Citizens had the chance to forge ahead when off a cross from the right by Fontanella, Kyrian Nwoko’s header was parried by Mintoff.

The match went into extra-time and on the 95th minute, Balzan regained the lead when off a Steve Pisani freekick from the left, Nenad Sljivic headed the ball slightly for Alfred Effiong to control before hitting home past Bonello.

Five minutes later, Balzan went close to increasing the lead when Effiong entered the area from the right and hit low with the ball bouncing onto Pena Beltre with Bonello saving the ball on the goal line.

However they were not to be denied on the 104th minute when Ljubomirac served Ivan Bozovic on the right and off the latter’s cross, Alfred Effiong headed home in style.

Valletta reduced the gap on the 115th minute after Ricardo Correa floored Enmy Pena Beltre inside the area and from the penalty spot, Mario Fontanella converted.

Bogdan Gavrila was sent off three minutes later for kicking an opponent but the Citizens’ never-say-die attitude saw them notch the equaliser on the 119th minute when off a cross by Joseph Zerafa, Rowen Muscat headed the ball over the Balzan goalkeeper.

In the penalty shoot-out, Santiago Malano scored the first penalty for Valletta, Aleksandar Kosoric scored for Balzan; Nicholas Pulis had his penalty saved by Mintoff while Nenad Sljivic converted to put Balzan 6-5 ahead. Mario Fontanella scored for Valletta and Uros Ljubomirac did the same for Balzan. Jean Borg and Andrija Majdevac scored the next two for Valletta and Balzan respectively; Rowen Muscat scored to make the score 8-8 but Alfred Effiong scored the decisive penalty to hand the FA Trophy to Balzan.