Valletta through to second round on away goals rule 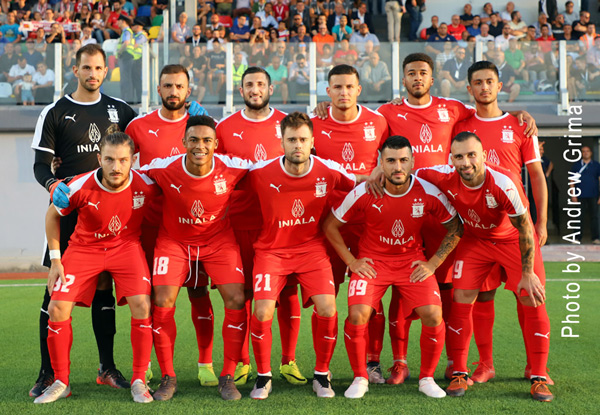 F91 Dudelange, on the other hand, will be facing KF Shkëndija of North Macedonia in the second qualifying round of the UEFA Europa League.

Valletta coach Darren Abdilla was forced to make two changes from the first leg as Rowen Muscat was ruled out through suspension while Santiago Malano sustained an injury which will rule him out for six months. Ryan Camilleri and Nicholas Pulis were therefore named in the starting line-up.

The Citizens appealed for a penalty on the 15th minute when Nicholas Pulis served Mario Fontanella on the right but the Italian striker ended on the ground only for referee Juri Frischer to wave play on.

Valletta managed to break the deadlock on the 35th minute when Kyrian Nwoko’s shot from the left hit the foot of the upright with goalkeeper Tim Kips beaten and off the rebound, Mario Fontanella placed the ball at the back of the net.

Four minutes from the end of the first half, Valletta went close once again when off a cross by Tulimieri, Fontanella’s close-range effort was blocked by the Luxembourg youth international goalkeeper.

Ten minutes in the second half, Enmy Pena Beltre concluded a good move on the right flank with a rising shot which ended wide.

However four minutes later, F91 Dudelange levelled matters when a corner from the left was blocked by Bonello and off the rebound, Mario Pokar’s low shot from the edge of the area beat the Valletta goalkeeper.

The visitors were now in the driving seat and on the 66th minute, Mehdi Kirch received an assist on the left and with a powerful drive tested Henry Bonello who turned the ball into a corner. Captain Tom Schnell went close with a shot from outside the area on the 79th.

Valletta replied with a Nicholas Pulis effort which was saved by TimKips nine minutes from time but on the 89th, Dudelange threatened once again with a header by substitute Omar Natami who however headed just wide from close range following a cross from the right.

The visitors maintained the pressure and a diagonal shot by Dominik Stolz scraped past the post on the 90th minute. Four minutes in added time, Stolz flicked the ball just wide off an inviting cross by Kirch from the left.