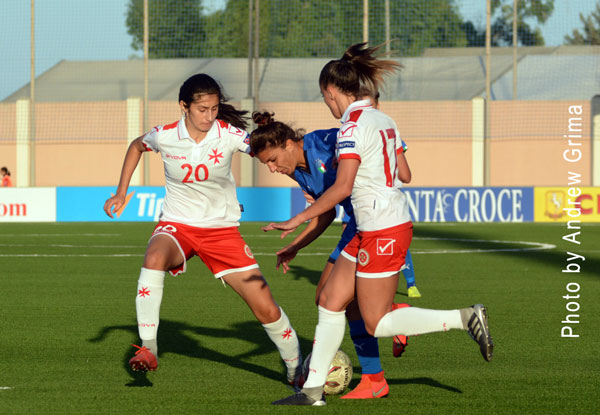 The Malta women’s national team lost 0-2 to Italy in a match from Group B of the UEFA Women’s EURO qualifiers at the Centenary Stadium on Friday.

This was the third defeat for Malta in three matches but the team’s performance promises well ahead of next month’s clash with Israel before the team travels to Italy for the away game. 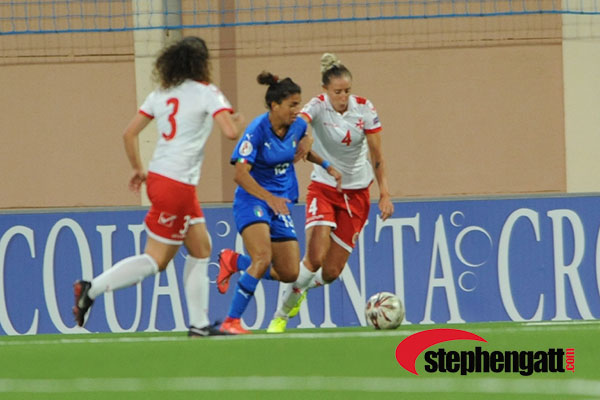 As expected, the visitors held the initiative right from the start but the Maltese did an excellent job in controlling their opponents throughout the first half. On the 19th minute, Valentina Giacinti had a shot from close range blocked into a corner and on the 27th, Elisa Bartoli served Aurora Galli whose powerful drive was saved with particular difficulty by Janice Xuereb. Malta, on the other hand, missed a great chance by Brenda Borg who hit wide when served on the right.

With the wind now blowing in their favour, Manuela Giugliano tested the Malta goalkeeper with an insidious cross shot from the right two minutes in the second half.  Janice Xuereb then came to the rescue with a great save on a shot from close range by Stefania Tarenzi on 61 minutes. Six minutes later, Xuereb was prominent once again with a save on a Valentina Bergamaschi header from close range following a cross from the left by Girelli. A long-distance effort by Sara Gama was parried by the Malta goalkeeper two minutes later.

However, Italy finally managed to break the deadlock on 69 minutes thanks to Elisa Bartoli who received a fine back heel pass by Girelli and concluded a good move with a well-placed shot which beat Xuereb.

Four minutes from time, an angled shot by Valentina Giacinti was saved in two attempts by the Malta goalkeeper. A minute later, Xuereb saved partially a powerful drive by Martina Rosucci with the ball then being cleared into safety.

One minute in added time, Italy were awarded a penalty after Emma Lipman handled the ball inside the area and from the penalty spot, Cristiana Girelli made no mistake to make it 2-0.