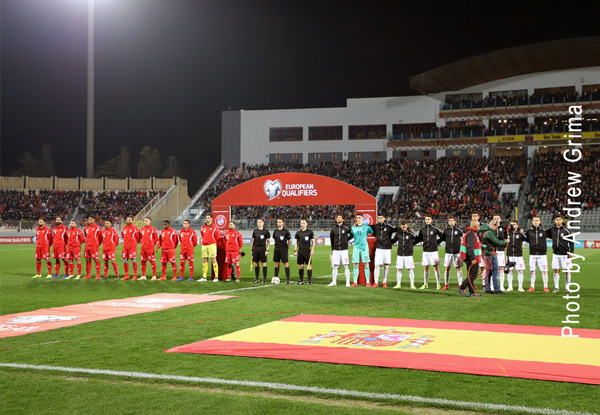 Atletico Madrid striker Alvaro Morata scored twice to hand Spain a 2-0 win over Malta in a match from Group F of the European Qualifiers leading to EURO 2020 at the National Stadium on Tuesday.

Spain have therefore claimed maximum points from the first two matches to take sole leadership in the group after Sweden earned a point in a dramatic 3-3 draw with neighbours Norway away from home. Romania defeated the Faroe Islands 4-1 in another match.

Malta had three changes from the team which defeated the Faroe Islands. Coach Ray Farrugia named Zach Muscat at the back to replace the suspended Andrei Agius. Joseph Zerafa and John Mintoff were also handed a start in lieu of Rowen Muscat and Michael Mifsud.

Henry Bonello started in goal, Steve Borg, Jonathan Caruana, Zach Muscat and Joseph Zerafa at the back; John Mintoff and Joseph Mbong on the flanks; Matthew Guillaumier, Juan Corbalan and Paul Fenech were employed in midfield with sole striker Kyrian Nwoko up front.

On the other hand, Spain assistant coach Roberto Moreno, who took charge of the team as Luis Enrique was forced to return to Spain for family reasons, made wholesale changes to the team which defeated Norway 2-1 on Saturday. Alvaro Morata, Sergio Ramos and Marco Asensio were the only players to retain their place in the starting line-up.

In goal, Kepa was preferred to de Gea with Hermoso – making his first competitive start – and Sergio Ramos in front of him; Sergi Roberto and Gayà on the flanks. Atletico’s Rodri started in the anchor role with Saúl Ñíguez and Canales besides him – the first time Spain have ever used that midfield three. Up front, Bernat joined Morata and Asensio.

As expected, the visitors held the initiative right from the start but they had to wait until the 16th minute to Saúl Ñíguez whose attempt from outside the area, when served by Sergi Roberto, ended just wide. A minute later, Saúl Ñíguez hit high from inside the area following an assist by Sergi Roberto from the right after the latter exchanged the ball with Asensio.

On the half hour, Alvaro Morata tested Bonello with a header which was parried by the Valletta goalkeeper following a cross from the right by Asensio.

However, a minute later, Morata was not to be denied, when he received a through pass by Hermoso, as his angled shot from the left beat the Malta custodian to put Spain ahead.

Five minutes from the end of the first half, Marco Asensio’s free kick from the right ended high.

Twelve minutes in the second half, Morata headed just wide off an inviting cross by Sergi Roberto. Two minutes later, Marco Asensio’s low shot was neutralised by Henry Bonello. Spain maintained the pressure and Asensio’s low shot was blocked by Bonello and off the rebound, Saúl Ñíguez’s effort was deflected by Caruana into a corner.

Spain doubled the score on the 73rd minute. Substitute Jesús Navas was the provider with a cross from the right flank and Alvaro Morata headed home from close range. 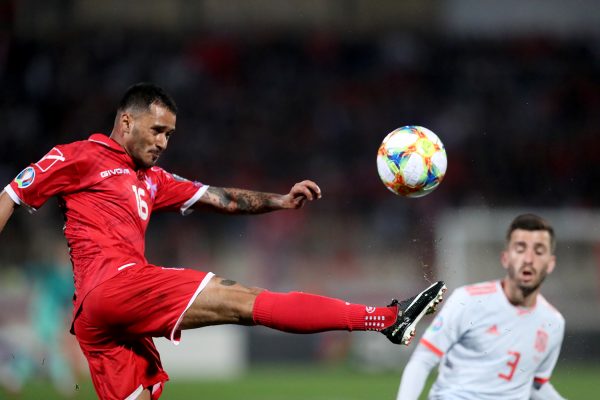