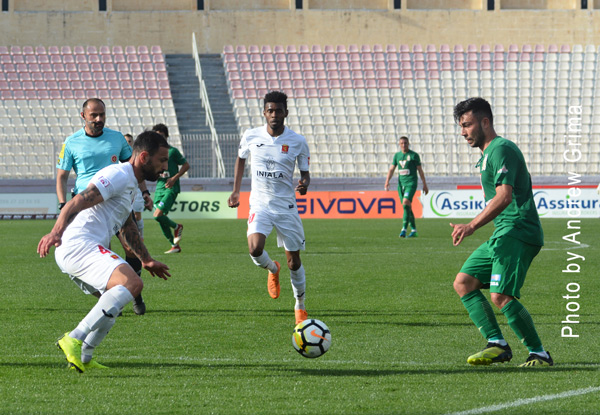 Valletta missed a golden opportunity to extend the lead on top the BOV Premier League after losing 0-2 to eternal rivals Floriana in the derby at the National Stadium on Sunday. This defeat leaves the Citizens just one point ahead of second-placed Hibernians.

For Floriana, on the other hand, this was a morale-boosting win after a far from impressive campaign this season. The Greens move to a more comfortable mid-table position as they now lie in seventh place on 28 points.

Floriana took the lead four minutes from the end of the first half when Brandon Paiber’s direct freekick from the right ended in the bottom right corner, beating goalkeeper Henry Bonello.

Three minutes from time, the Citizens went close to equalising but Arthur Oyama came to the rescue for Floriana as he cleared off the goal line a close-range effort by Jonathan Caruana.

However, on the 90th minute, Floiraina selaed the issue with a second goal when Kristian Keqi concluded a good run on the right flank by rounding Steve Borg before beating Bonello with a rising shot ending in the top left corner.