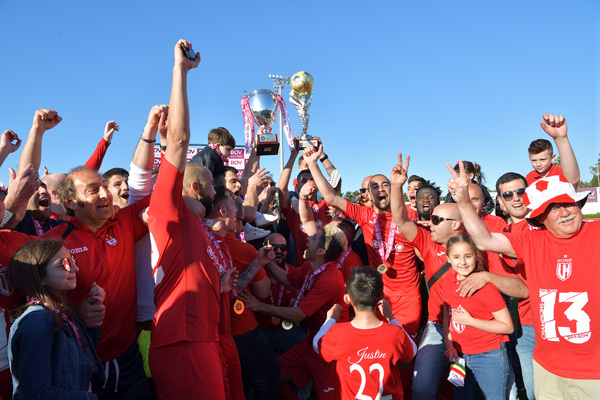 Victoria Hotspurs were crowned BOV Gozo Football League First Division champions after their 4-2 win over Nadur Youngsters at the Gozo Stadium on Sunday.

After the game, Samuel Azzopardi, President of the Gozo Football Association and Horace Laudi, Chief Officer at Bank of Valletta presented the trophy and medal to the new Champions.

In another match on Sunday, Ghajnsielem defeated Xewkija Tigers 5-2. Darko Krstic put the Tigers ahead after just one minute. Luis Andre de Melo Lima missed a penalty but Kenneth Mercieca converted another penalty on the 36th and Luis de Melo Lima made it 2-1 on the 63rd. Claudio Antunes Pavlidis levelled matters for Nadur on the 77th but De Melo Lima scored three on the 79th, 83rd and 85th.

On Friday, Gharb Rangers and Kercem Ajax shared the spoils in a 1-1 draw, goals by Milos Perisic for Kercem on the 39th and Omar Xuereb for Gharb six minutes in the second half. A draw which condemned Munxar to playing in Division 1 with Gharb taking the Relegation/Promotion Play-Off spot.

In another match, Munxar Falcons defeated SK Victoria Wanderers 2-1. Aaron Touarha opened the score for the Wanderers on the 54th but Diego Martins de Souza equalised on the 75th and an own goal two minutes in added time handed Munxar the three points.