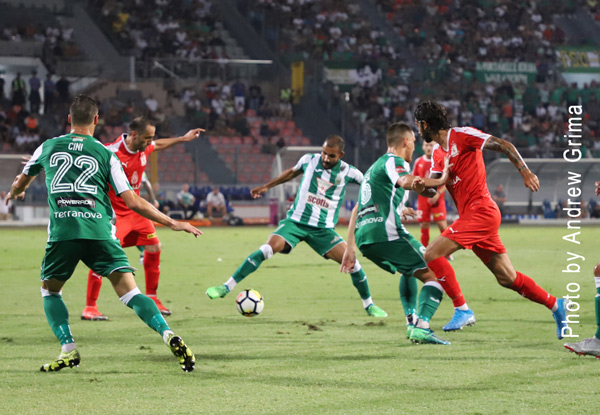 A goal four minutes in added time enabled Valletta to rescue a point in a 1-1 draw with Floriana in the derby at the National Stadium on Sunday.

The Citizens therefore ruined the Greens’ perfect record as they seemed heading to another narrow win courtesy of Kristian Keqi who had already handed them two wins over Birkirkara and Balzan. Floriana now join Senglea and Sirens on top the BOV Premier League table.

Valletta, on the other hand, now lie on the four-point mark following a defeat to Santa Lucia and a win over Sliema Wanderers.

Making his debut for the Citizens was Georgian midfielder Irakli Dzaria.

Floriana went close to taking the lead early in the game as a corner from the left created havoc inside the area and Kristian Keqi’s over head kick ended just wide. Diego Venancio then had a powerful drive which scraped past the upright.

Two minutes in the second half, Floriana took the lead when they were awarded a penalty after Ulises Arias was brought down inside the area by Steve Borg and from the penalty spot, the usual Kristian Keqi made no mistake.

Valletta replied with a Rowen Muscat long-distance effort which was parried by Akpan and then Irakli Dzaria’s shot from the edge of the area ended just wide. Following a cross from the left by Mario Fontanella, Kyrian Nwoko tested the Floriana goalkeeper with a good header.

Four minutes in added time, Valletta notched the equaliser when off a Kevin Tulimieri corner from the right, goalkeeper Ini Etim Akpan punched the ball, Bojan Kaljevic’s attempt was blocked and off the rebound, Enmy Pena Beltre placed the ball at the back of the net.