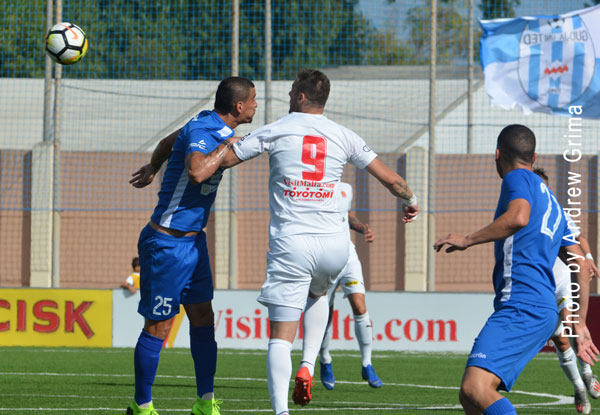 Valletta returned to winning ways as they registered a narrow win over Gudja United at the Centenary Stadium on Sunday. The Citizens therefore join Hamrun and Senglea on the 11-point mark, six behind leaders Floriana.

For Gudja United, this was the third consecutive defeat which leaves them second from bottom on four points.

After having a Mario Fontanella effort turned into a corner by goalkeeper Timothy Aquilina on the 7th minute, ten minutes later, Fontanella served Enmy Pena Beltre whose effort hit the woodwork.

Valletta took the lead on the 22nd minute when Mario Fontanella received an assist and rounded Juan Bolanos before beating Aquilina with a diagonal post from the right.

Bojan Kaljevic had a good chance of doubling the score on the 25th when the Gudja goalkeeper saved partially a shot from outside the area but his conclusion was weak.

Alexandre Santana missed a good opportunity for Gudja hitting high from an ideal position inside the area early in the second half and on the 52nd, Bojan Kaljevic hit the foot of the upright. An Allan Ricardo Miranda effort from the right was neutralised by Yenz Cini.

Gudja then appealed for a penalty after Miguel Antonio Jimenez appeared to be fouled inside the area on the 71st minute but the referee waved play on. In added time, Fontanella could have added another following a good run on the left but hit wide.