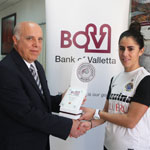 Ylenia scored 182 goals in 132 matches, justifying the club’s claim that she is their top player.

Joe Grech, Manager at Bank of Valletta Paola branch, presented Ylenia with the BOV Player of the Month Trophy.