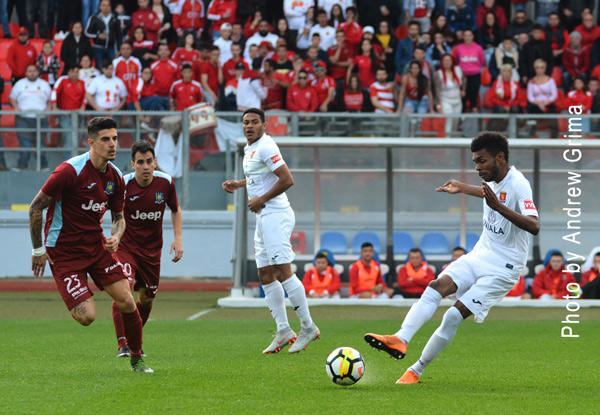 Valletta remain in second place, one point behind leaders Hibernians, after being held in a 1-1 draw by Gzira United at the National Stadium on Sunday.

Following last week’s defeat to Floriana, the Citizens were aiming to bounce back with a win, especially after the 3-2 win for Hibernians over Birkirkara which enabled the Paolites to leapfrog Valletta. However they failed to take home the three points.

For Gzira, this was another important step towards securing third place and a place in the UEFA Europa League this summer as they stay five points behind the Citizens and five points ahead of fourth-placed Hamrun and Sliema.

Valletta, who had Gilbert Agius deputising for coach Danilo Doncic, had a perfect start, taking the lead on the 4th minute. Referee Fyodor Zammit ordered a penalty after Joseph Zerafa’s cross from the left hit Roderick Briffa’s arm and from the penalty spot, Steve Borg made no mistake.

The Maroons replied with a cross by Juan Corbalan for Haruna Garba whose close range effort ended high on 28 minutes. Henry Bonello then performed a great save on a Justin Mengolo header following a free kick by Andrew Cohen from the left on 41 minutes.

Eight minutes in the second half, Gzira could have equalised when they were awarded a penalty after Jonathan Caruana was adjudged to have fouled Haruna Garba inside the area but Andrew Cohen’s effort from the penalty spot was neutralised by Bonello.

However on the 56th, Gzira levelled matters when Edison Bilbao Zarate sent Justin Mengolo through on the right and the latter rounded the goalkeeper before placing the ball at the back of the net.

Valletta went close once again on the 65th minute but Justin Haber turned into a corner a fine Kyrian Nwoko header when served by Zerafa. Substitute Jean Borg threatened with an angled shot from the right ending just wide two minutes from time. Finally Haruna Garba had a shot from outside the area just missing the target in added time.