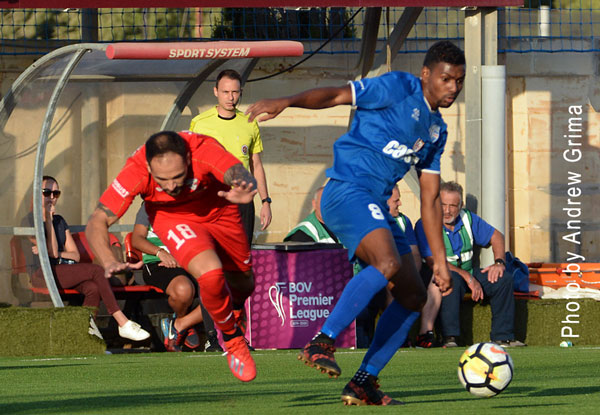 Tarxien Rainbows remain anchored at the bottom of the BOV Premier League as they suffered a seventh defeat in as many matches, losing 1-3 to Balzan at the Centenary Stadium on Sunday.

On the other hand, Balzan registered a second consecutive win to join Mosta and Hibernians on the 10-point mark.

Balzan took the lead on the 22nd minute when they were awarded a penalty after Matthew Tabone floored Andrija Majdevac inside the area and from the penalty spot, Andrija Majdevac

Four minutes in the second half, Brooke Farrugia almost equalised with a cross shot from the right which was not held by Sean Mintoff.

However on the 53rd minute, Tarxien levelled matters when off a Thomas Veronese freekick from the left, Destin Mambouna headed the ball home.

Matthew Tabone went close, heading just wide off a corner by Murillo Torres on 62 minutes but a minutes later, a Steve Pisani freekick created havoc inside the area with the ball reaching Aleksandar Kosoric who hit the foot of the upright.

Balzan coach Jacques Scerri made two changes replacing Arthur Faria Machado with Ryan Scicluna with Paul Fenech and Alfred Effiong. This move proved the right one as less than a minute later, Alfred Effiong received an assist by Stefan Dimic from the left and rounded Brooke Farrugia, beating Rudy Briffa with a diagonal shot from the left.

The Rainbows missed a good opportunity on the 71st minute with Nevin Portelli caught Sean Mintoff out of place bit his weak shot was cleared off the goal line by Kosoric. Balzan replied with a Stefan Dimic effort from he left which was parried by the goalkeeper.

Five minutes from time, Balzan sealed the issue with a third goal thanks to Andrija Majdevac who slotted the ball past Briffa following a cross from the right by Ljubomirac.